In the latest National Human Development Report on mineral extraction in Afghanistan, the UN Development Program (UNDP) said decades of mining in the war-ravaged country “without a clear vision” has not helped reduce poverty but has triggered local conflicts and harmed the environment.
The report said that the control of mineral extraction by insurgent groups such as the Taliban and Islamic State (IS), as well as local militias, warlords, and occasionally security forces is further spreading corruption and violence.
“In Afghanistan, there is an urgent need to improve governance, tackle corruption and put an end to illegal extraction and trade of minerals,” said Abdallah Al Dardari, the UNDP Resident Representative in Afghanistan.
He said that while large-scale mineral, oil and gas projects can be instrumental in financing development, it “will require stability and enhanced government capacity to get its due share from these projects and use them well for human development.”
The report notes that like many resource-rich countries, Afghanistan suffers from a “resource curse” – which is characterized by rapid resource-led growth accompanied by large inflows of revenues to the government and to extractive companies, which leads to reduced accountability, increase in corruption, and collision between corrupt officials and businesses. 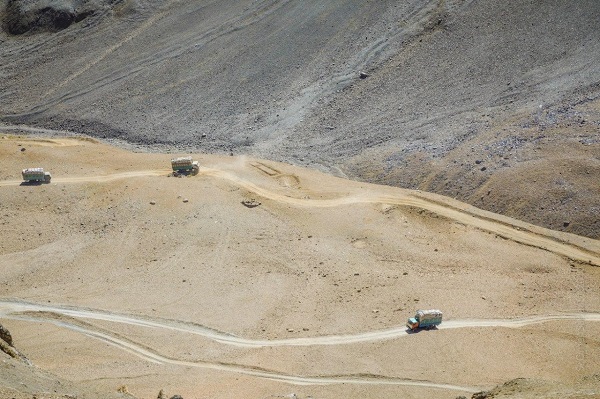 The report shows lucrative large-scale mining sites operate on an industrial scale that openly transport bulk minerals on large trucks along major roads and across the border to Pakistan.
The war-torn country has rich deposits of minerals and hydrocarbons, including rare earth metals, iron, copper, cobalt, gold, and critical industrial metals like lithium.
However, “at present these contribute little to the economy or the society,” the UN report notes.
Many large-scaled projects such as the mining of the Mes Aynak copper deposit and the Hajigak iron ore deposit are stalled due to conservation and insecurity issues.
In 2010, the U.S. Task Force for Business and Stability Operations had estimate that the monetary value of Afghanistan’s mineral resources at nearly $1 trillion – but that did not translate into trillion dollars flowing into the economy.
Afghanistan’s current fiscal revenues from mineral resources are small. In recent years, they accounted for less than 2% of total government revenues – around $42 million annually. This is partly because the large-scale projects have yet to take off while most other mining is informal and/or illegal and outside the fiscal regime.
The report estimates that production are significantly larger than official figures – twice as high for talc and coal, and much more for precious and semi-precious stones and other minerals.
The data also shows discrepancies in the record of trade mineral from Afghanistan to Pakistan, showing considerable smuggling takes place.
However, the most important point is that mining activities have been “financing and fuelling conflict while undermining the legitimacy of the State and further spreading corruption and violence.”
The Taliban and the IS in Khorasan Province (IS-K) are competing with the state for minerals.
For the Taliban, the extractive industry is the second-largest revenue stream after the drug trade. The IS-K has also started tapping into the sector after financial support has waned from the central IS.
“For a mining company, the benefits of paying taxes to the government are limited, while the risks of not paying taxes to insurgents are enormous,” the UN said.
This all leads to illegal mining being rife in Afghanistan.
Acting Minister of Mines and Petroleum Haroon Chakhansuri said, “I welcome the release of the report and look forward to our collaboration with UNDP and other partners on the opportunities explored by this report on the potential of economic growth through extractive industries.”
The minister added that the recommendations made in the report on “policy choices” to ensure people benefit from and participate in the extractive industries, would be considered by the government.